With summer in full swing, Independence Day offered a convenient midweek holiday, and therefore a happy opportunity to celebrate with one, or even two, very long weekends.  Email marketers seized this opportunity with increasing gusto, lining our inboxes with messaging to support various red, white and blue themed, mostly promotional events.

We looked at related email, based on several subject line keywords related to Independence Day, for the thirty days ending July 4th, as compared with the similar period last year, analyzing both activity and performance across eleven key industry sectors.  Key metrics show campaign activity, inbox performance and reader engagement.  Our key findings are in the tables below. 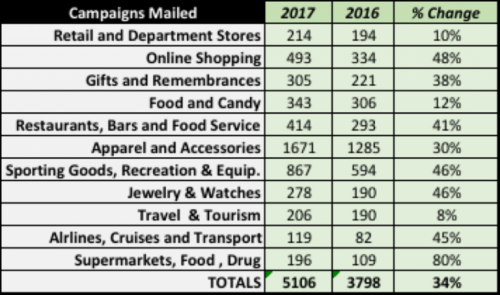 Most subject lines reflected use of “4th” or “Fourth,” to reference the event, but a significant number of other subject lines used “Independence” and variations of “Red, White and Blue.”  With respect to the latter group, we saw considerable ingenuity in the use of “Red, White and . . .” with rhyming-with-“blue” words like boom, crew, cruise, views, brews, new and you.  And with other word-endings, such as delicious, dawn, hot, save, stylish and beautiful.

Below are ten examples of best performing July 4th emails.

Next up?  Our report on this year’s Amazon’s blockbuster “Prime Day — July 11th.  We’ll show you what Amazon and competitors did, and with what effect.